Sterbhaus started in 2007 as a five piece with quite a different line-up. The idea was quite simple - well... If there actually was an idea ofc... But in general it was about some members playing instruments that were a second choice (most members played in other outfits as well), write a type of Thrash metal that was favourable to some of the members at the time and not taking ourselves too serious. This is probably where the humor thing started from but then - as well as music -lyric and imagewise, evolved to such an extent the origins can be hard to realize.

The fact that the band started out of very modest aspirations came across in everything the band did. Still during the first years Sterbhaus managed to become quite the household name in Stockholm, and especially with the second demo-album “Hits for Dead Kids”. The demo-album featured the now cult sock puppet video for the song “House of the Dead Dwarf” - which incidentally was Marcus Hammarströms video producing debut having built, created and directed the whole effort, and that experience would prove to be quite vital for the years to come. At this point Marcus started the festival "Sthlm Thrashfest" which ofc had Sterbhaus as somewhat of an in-house band playing each installation and also had Sterbhaus booked doing exclusive shows at the now closed down venue "The Cave" in the outskirts of Stockholm.

Sterbhaus would however be reborn as a quartet and with quite a different approach, and this would be done with the 2012 album “Angels for Breakfast …And God for Lunch”. Marcus was now also doing lead vocals (apart from his bass duties) and Jimmy Ahovalli took on a far more pronounced role as lead-guitarist. Erik Röjås at this time was only session for the recording so a string of other session drummers filled the spot for live shows until Sterbhaus found Peter Lindqvist (now in “Kall”).

The band headed to Chile for a headlining tour and recorded a first video "Insecticide" with director Carlos Toro (Therion etc) with absolutely no humorous approach - in order to show that Sterbhaus wasn't just about a laugh or two anymore.

Touring commenced with Vader and Melechesh as well as with Shining in 2013 and festivals like Rock Harz, Way of Darkness, Extremefest etc was swiftly checked off that proverbial bucket list.

The “Angels for Breakfast…” album spurred quite a lot of attention and even snatched a few awards. It spawned three videos, of which the last effort was for the song “Absolutely Do Not Die!” and it firmly cemented Sterbhaus as leading in the field of creative, witty and high quality music videos.

Sterbhaus wasted little time. The next album “New Level of Malevolence” was released in 2015 with a quite ambitious plan for promotion. The album saw the band in an even heavier incarnation sporting a feisty more spittingly aggressive direction and with a far more accomplished approach both musically and lyrically. It was also a bit grittier in an obvious attempt to try to move away from the polished direction of the previous album. And just prior to the recording of the album Erik Röjås was recruited back inte the studio and also as full time member. Everything looked all jolly and sweet… Since this album was (and still is) a monster. 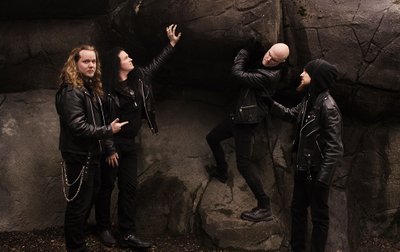 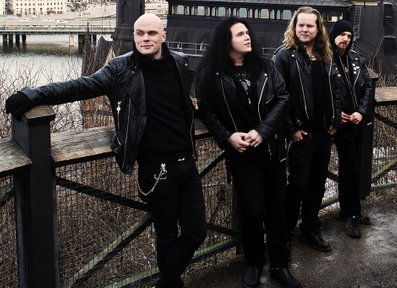 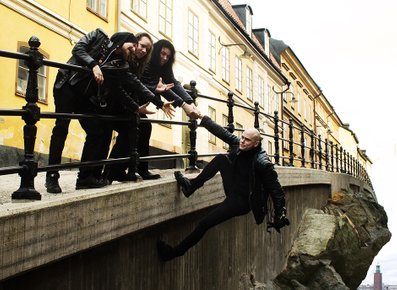 Sterbhaus is a Stockholm/Sweden based outfit dealing in Thrash, Black, Heavy, Progressive... Hmm......

....Yeah... You already hear where this is heading, right? So, we had the bright idea to think we should rid ourselves of all these labels and just say "Metal Deluxe". That was a few years back but among all those hundreds of variously valid or sordid sublabels in Metal, who knows if it will ever stick. And who cares? Sterbhaus trades in Metal Deluxe - The culmination of what real and honest metal regardless of subgenre is supposed to be.

Unending topics of how Metal for the last decade is either diluted or ridiculously orthodox aside, Sterbhaus chose to climb its own little solitary peak, and stayed away from either trying to reinvent the wheel or walking in already heavily trodden paths. We won't stick a pentagram in there to make sure we're true (or "trve") and we sure as hell never did this for those buying Ramones or Motorhead t-shirts on H&M. Sterbhaus is about the sheer Metal and the quality, and we have the audacity to spice it up with dark humor, wit and unrelenting charm.

As mentioned earlier, the promotion plan for the album was very ambitious including several video releases, three separate European tours as support act and festival shows to follow. However, unfortunately those three tours were all cancelled and video releases as well as festival bookings had to adapt. In the latter, it unfortunately meant not many festivals got the word and it was a devastating blow as live shows have always been where Sterbhaus was at its best. One video had already been released for the song “Crossed and Pissed and Devoured”, and now instead of touring the band focused on the next video and the professional filming of their coming release show with Grave and Raise Hell at Göta Källare in Stockholm. The video would be for the song “Bloodbarf” (again by Marcus together with film maker Martin Strandberg with whom the band exclusively worked since “Absolutely Do Not Die!”) and it turned out to be such an explicit affair that it was banned in several promotion and media channels - including Facebook (the ban in the latter is now fortunately released).

From video and live show filming of the delayed release show for “New Level of Malevolence” (done with seven cameras) Sterbhaus swiftly moved to a rather unorthodox trick of releasing a digital EP and made sure it was free for download every December from 2016. The “Krampusnacht” EP (featuring a fantastic artwork by renowned Canadian painter BROM) would however prove to be the last release for a while and the live shows proved to be in shorter supply. This was partly credited to Marcus joining the renowned Swedish extreme act Shining.

After some quiet years Sterbhaus is now back… Strangely enough to say farewell. It was officially stated the band breaks up but like always when it comes to Sterbhaus, this will be done in an epic and unorthodox way culminating in a new final album release in late 2020. Until then everyone can look forward to different other releases such as the live album and video of the whole show at Göta Källare previously mentioned and vinyls and new merch for the Krampusnacht EP.

And ofc, there may be some surprises along the way… 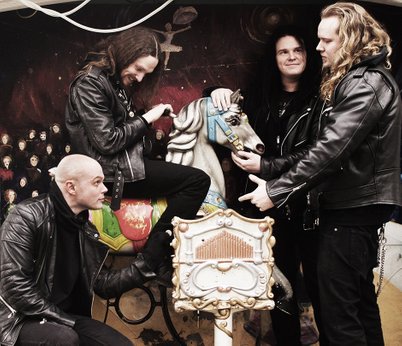