TO SAY FAREWELL - IN STYLE!

It's time to kill the silence and get back in the game... To say goodbye - IN STYLE!

Our terrific Metal Deluxe trio will embark on an epic farewell starting now (!!) with the release of this website, web shop (and sale associated with it) as well as a ripping cover of Jethro Tulls “For a Thousand Mothers”. We've obviously kept quiet for some time in social media etc, but from this day to the end of days (for Sterbhaus) we will reboot and start posting, releasing albums etc etc. You just wait and see... ;-)

Yes. Sterbhaus is disbanding in 2020. And why is that after 13 years (give or take some months)? Actually, there are numerous reasons for this of which we most likely will reveal more of later, but one of the more rather undramatic reasons is that the members simply need and want to focus on other things musically and artistically. This has been brewing for quite some time (especially during the last couple of years) but since it’s not an issue of members falling out it seems rather proper to end things on top.

...And that is why we have a quite an amazing schedule filled to the brim with extraordinary stuff for the coming year!

What's going to happen - among other things, is the long over due release of the “Krampusnacht” EP on vinyl and CD. The official date for this is already set and keeping in good spirits of the mood of the album... we can reveal that it is Friday the 13th of December 2019. In a few days we will announce more details about this, so keep posted (see?? We're already committing to not going silent again!). Other activities in the name of our demise includes a live album of the release show we did for “New Level of Malevolence” in 2015 (now with a stunning mix by Ronnie Björnström), as well as a video release of that entire show - professionally filmed with seven cameras. Of all these things we will reveal more soon.

Finally – in 2020, we will release a last final new album! It's already written and for the most part preproduced, and it is not about dishing out leftovers. This is the best one yet, and we've spent an eternity writing and perfecting it.

So don't fret! We have at least a full year of “hanging out” (although we kinda already stopped playing live) and we will keep you informed about what Marcus, Jimmy and Erik are up to apart from Sterbhaus. A lot of it may only be posted on social media so be sure to follow us on Facebook.

Enjoy the ride! And again... Do check out that unreleased bonus track for the album "Angels for Breakfast ...And God for Lunch" from the 2011 sessions in Abyss studios. It kills and Jethro Tull was always the best. 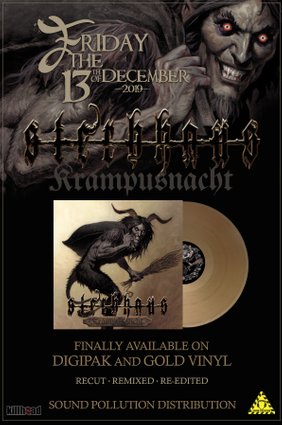 YES! The day is finally here! It's The Gold Vinyl and Digipak version released on the 13th of December 2019 has had the title track undergone rigorous reproduction (re-cutting/editing etc) and is remixed and remastered to sound better than ever.

Distributed by SoundPollution and available most anywhere. Due to tight shipping etc some stores may not yet have got the vinyl version in stock yet, so to secure a copy asap the best way is to order it from the Official Sterbhaus webstore... here!

As always! Keep updated on the Facebook page regarding reviews, links to shops, etc etc

After quite some down-time, a new simplified site is now launched. Technical mumbo jumbo aside (yep, that was actually the main reason for all the issues) we want to celebrate this by launching a sale on our Web shop.

The sale is 50% or more off from Merchandise (t-shirts etc) and CDs and will last during a limited time. Make sure to check out our new Web shop for all the deals...

Can't believe this first post was this boring... but what are you gonna do eh?